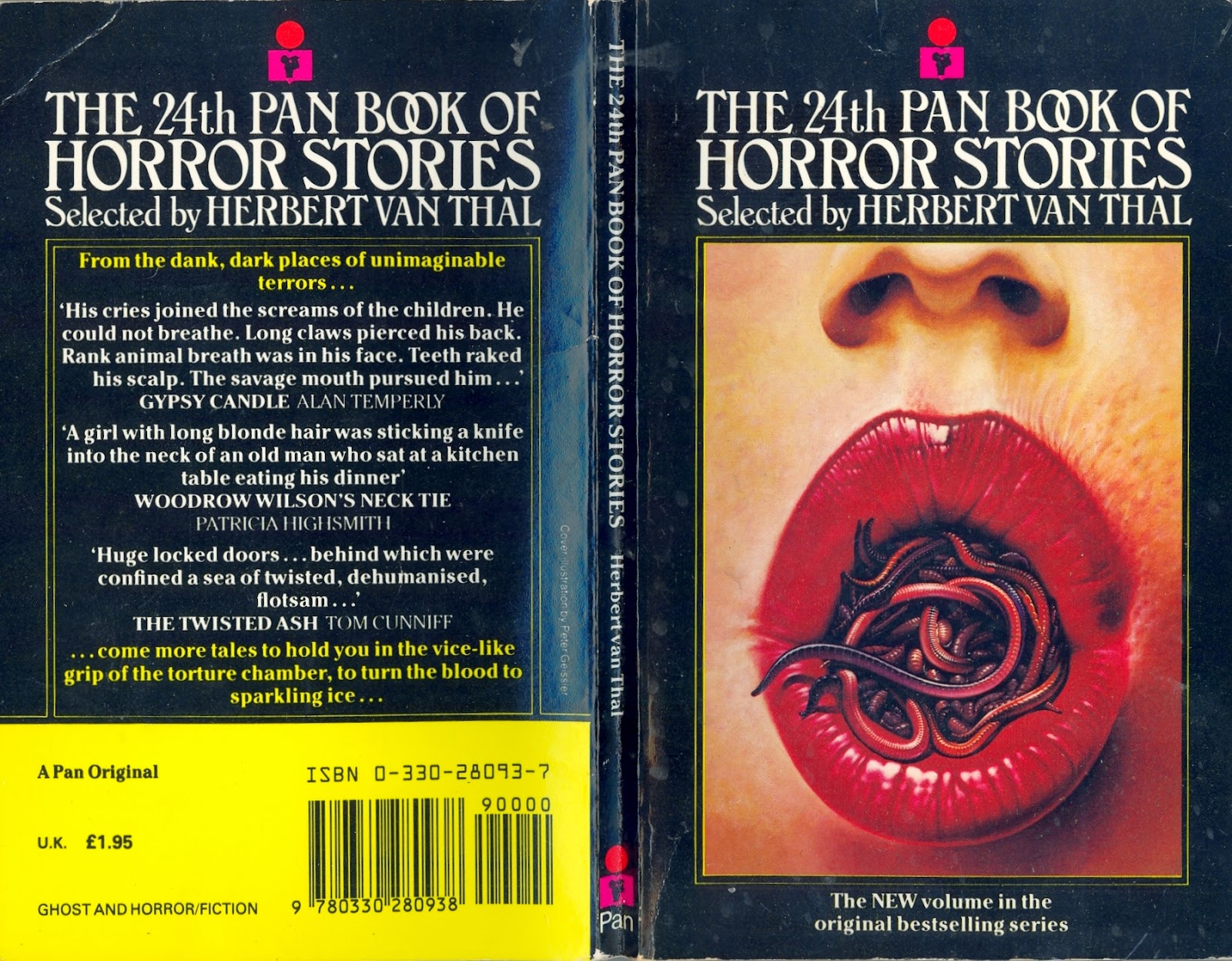 Invertebrates, so we are being told, will solve the world's food crisis.

THE MOMENT OF DEATH
By Ken Alden

Professor Dorleac has been granted access to the body of a convicted murderer at the point of his execution by guillotine, in order to attempt to ascertain how long consciousness remains after decapitation.  The experiment provides him with adequate evidence that the answer is: At least for a few seconds.

Although the punchline to this one represents a bit of a let down, the tale is saved by the well-written characters of Dorleac and the prisoner Lanover, and the sparky exchanges between them.

The author, through the neat trick of having Dorleac a bit of an anorak on his specialist subject and hence prone to voluble rambling, sneaks in an extensive amount of fascinating detail on the incidence of accidental premature burial.  The reading of which I found quite the scariest thing in many a Pan volume.

Mallet, an antique collector, purchases an 18th century mirror from a dealer (known as the Jackdaw).  The buyer becomes obsessed with the previous owner of the item, a girl named Rose Marie Leigh who died in 1918 aged just twenty.  He convinces himself he occasionally catches glimpses of her in the mirror, and yearns to see a collection of letters written by the girl which the Jackdaw claims to possess.

The pair occasionally lay flowers on the girl’s grave, but when Mallet breaks a promise by visiting the cemetery alone, the Jackdaw breaks off their acquaintance.  But this just increases Mallet’s obsessive desire for the letters.

A beautifully and intelligently written tale which scatters all sorts of clues around – I loved The Aspern Papers reference - but leaves most of them unresolved, so the reader has to utilise a bit of grey matter to come to his/her own conclusions.

My own interpretation is that Rose Marie and the Jackdaw (we learn his real name is James Leigh) were twins, and that the Jackdaw raped and murdered his sister fifty-or-so years earlier.  Now deceased (perhaps executed) his ghostly form (he does not reflect in the mirror) is earthbound until the mirror is destroyed; something, for whatever reason, he is unable to do himself.

In selling the mirror to Mallet he sets in motion a chain of events which he knows will lead both to the destruction of the mirror and his subsequent release from whatever limbo existence he has found himself in.

Quite who the chap breaking down the door at the end of the tale is though, I have not got a clue.

Attending a country fair, farm labourer John Honeyman and his family encounter a dancing bear, which takes a rather unsettling interest in daughter Abbie.  Later at a stall run by the same gypsies who own the bear, Abbie buys a rabbit-shaped candle holder, for which the old gypsy woman gifts her a candle.

Abbie uses the candle to light herself to bed that evening, but moments after blowing it out is convinced the bear is in the room with her.

An excellent contribution from AT this one; the growing sense of impending doom becoming almost unbearable as the narrative progresses.  I do so wish he could have found his way to providing us with a happy ending though, for all of the Honeyman family are such likeable individuals.  A triumph for Temperley’s characterisation skills, I suppose.

Clive loves visiting Madame Thibault’s Waxwork Horrors, dropping in at least once or twice each week to view the gruesome tableaux.  Just imagine, he thinks to himself, how much more fun getting oneself locked inside the place overnight would be.  After which, murdering the staff and placing the bodies into the exhibition appears his next logical step.

Patricia Highsmith over a long and illustrious career published a fair old number of memorably creepy tales but, regretfully, this was not one of them.  The problem really is Clive, who never really comes off the page as any sort of believable character.  Why he is so obsessed by the waxwork exhibition we are not informed, and his motivation for killing the attraction staff is never explored.

His illogical trip west to Indiana, and the subsequent refusal of the police to take his confessions seriously all serve to blur an already unfocussed narrative further.

John manages a small gift shop – Tomorrow’s Antiques – on his own, until his boss sends him Sorrel, a rather intense, borderline-OCD woman to help.  Sorrel just loves cleaning and rearranging the stock, but on the downside has a foul temper.  Which John discovers when he attempts to intervene in a tussle between Sorrel and a customer over the last teddy bear in the shop.

An unreliable narrator tale this one, which just about holds the reader’s attention with some delightfully off-kilter language.  But ultimately the narrative just dribbles on taking the reader nowhere of interest.


THE LANDLADY
By Roald Dahl

Billy Weaver has been transferred to his employer’s Bath branch, and arrives in the town looking for lodgings.  He is absolutely delighted to find a homely-looking B&B at a remarkably modest rate.

The chap is, however, slightly disconcerted to note when signing-in that there appears to have been only two other guests in the last three years – and both names, he is sure, are vaguely familiar.

There are few more secure guarantees of quality when it comes to a short story than the words “Roald” and “Dahl”.  Perhaps better known for his children’s’ tales, Dahl penned a whole raft of fiction for adults (as opposed to adult fiction, if you see what I mean), this particular effort sitting very comfortably within the Pantheon.

Dahl effortlessly introduces and endears us to Billy, by highlighting his naiveté with the delightful passage:

“He walked briskly down the street.  He was trying to do everything briskly these days.  Briskness, he had decided, was the one common characteristic of all successful businessmen.”

And although Billy suspects “Something (is) really unusual about all this”, the author’s skill has the reader sussing things out way before the unfortunate boarder, particularly once The Landlady reveals the truth about her pets.

And Dahl, with delicious subtlety, leaves us with just the merest hint that there may even be a sexual aspect to the mad old trout’s activities.


LOVE ON THE FARM
By Alan Temperley

Myra Thomson is a 45 year-old widow prone to bouts of depression.  Helping her to run her pig-farm is 19 year-old Duggie, and together the pair have discovered a kind of loving which, for the present at least, suits both down to the ground.

But when Myra returns early from a shopping trip to find Duggie in bed with a girl he picked up at a disco, a train of events are set in place which visits disfigurement, arson, murder, dismemberment, rape, necrophilia and most points in between.

Following on from his Kowlongo Plaything grim-fest in Pan 23, Temperley presents a sprawling 56-page epic of Emmerdale gone awry.  But there is really little of merit in this entry, which I suggest would be unlikely to provide anyone with any incentive for a repeated reading.

Upon inheriting his great aunt’s cottage, James Beaumont ignores the stipulation in her will that a twisted and knarled old ash tree be left to grow in the garden.  Instead, he has it cut down and the timber used to line his study.

Soon he begins to hear a strange woman’s voice in the room.

A clear tribute to the great M.R. James this one I feel.  James himself published a not dissimilar tale entitled The Ash Tree, which also featured a tree inhabited by the malevolent spirit of an ancient witch.  Of course, the protagonist’s first name is not coincidental.

Cunniff’s effort is a pretty fair homage, but the breathless climax to the tale judders to a halt on two occasions when the author has to interject exposition.  Upon arrival at the cottage in response to Helen’s (James’ wife) frantic phone call, rather than rush straight in to his friend's aid, the narrator (fatally for James) tarries on the doorstep for a chat.

Then after James has been subsumed into the wood paneling, rather look for ways to rescue him or getting Helen out of the room, the narrator finds time to peruse the old book left nearby conveniently open at an explanatory page.

And also, also, also – the relative from whom James inherited the house is described as his great aunt, yet given he is the son of the old biddy’s brother she would just be a plain old aunt, surely.

As an aside, my best friend from primary school was also called James Beaumont, and he disappeared over the horizon some thirty-odd years ago.  Should anyone out there know of a James Beaumont originally from Boghall, Bathgate in West Lothian in Scotland, ask him to get in touch to say “Hi”.
Posted by Ian38018 at 13:22